What´s going on with Buba?

Hey there! Last fourteen days were a little bit hektic for me. Before last weekend I had been leaving for Masters of
Dirt to Vienna, where I had been invited by Georgie Fechter himself. But before all that I had been supposed to close up my exams and I can tell you it was a tough time for me however I managed myself to made it! Then I could leave with free mind to Austria with Monster Energy videomaker Adam Pavelka. After that bussy weekend I just popped in Děčín for a while, solved some personal things, made my bike ready for Forum Duall Mall and left for Liberec – that was last weekend. I´am adding some photos with legend to avoid long boring text + bonus video!

Where to start. M.O.D. was one big fun. Me and Georgie (MOD founder) are working on some projects starting this season. If everything is going fine it will be fuckin´ awesome ;) This is photo with my Monster Energy team mate Máťa Česák - unbelieveable 13yo fmx kid!

Next weekend I moved back to Czech for Forum Dual Mall Liberec.

I was supposed to do an English comment for extreme.com live broadcast but...

I also did a small show during the event. I left the microphone and hit the final drop. Not bad after six months without any riding, huh?

Návy - Czech speaker lend me his microphone and the medal for a winner.

I almost forgot to mention the M.O.D. party...it was one big blackout!!! 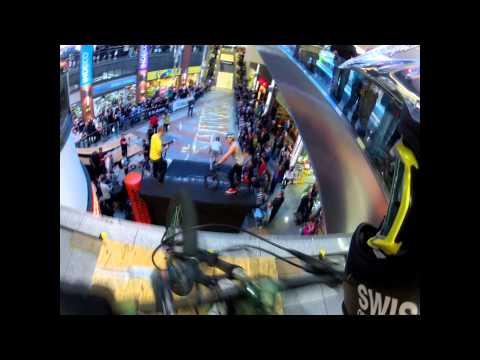